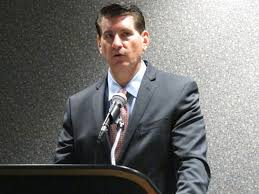 Patrick Jameson, the executive director of the Maryland Cannabis Commission will be resigning at the end of November. Jameson, who was a former state trooper took the reigns as the head of the program in April of 2016 after the previous director, Hannah Byron, resigned. While the reason for his resignation isn’t particularly clear, he did put out a statement that he would like to pursue other interests. While Jameson did not elaborate he did put out a statement that, “It has been an honor to help sick people and launch a new lucrative industry in Maryland.” This news comes just weeks before legal cannabis sales are expected to begin within Maryland.

While his tenure as the program’s director was filled with many impediments, the Chairman of the MMCC Brian Lopez released a statement that they were pleased with his work and wish him well. However his departure comes at a crucial time within Maryland’s medical marijuana program history. On December 8th of this year there is a deadline for which dispensaries have to receive final approval from the Cannabis Commission or risk losing the opportunity to open for business within the program.

Chairmen Lopez stated that inspectors are reviewing 40 of the 100 pre-approved dispensaries in hopes of awarding final licensure before the December deadline. Many of the industry participants are getting excited with the launch of the industry being right around the corner. Jack Van Wingerden, owner of SunMed Growers, one of the 15 grow companies approved to cultivate medicine, said in a statement that that they wished Jameson well and hoped to have medicine in the hands of patients very shortly.

There is an abundant amount of enthusiasm for the launch of this program and patients can soon expect to reap the benefits for which they’ve so patiently waited. If you are interested in finding out more information about the medical marijuana program in Maryland and how to begin the process of enrolling feel free to contact a representative at Greenway Consults, 410-762-8745.