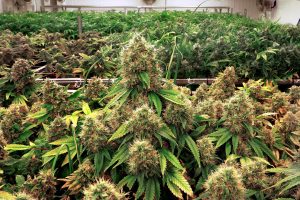 ForwardGro has completed the state’s first harvest, a major accomplishment for the medical marijuana program.

ForwardGro of Anne Arundel County harvested its first grow this past month and have sent out their product to get tested by one of the approved, independent testing labs in Maryland. This is a great milestone for Maryland’s medical marijuana program which has had to overcome many hurdles to get to this point. Once the marijuana is tested for safety and potency it will then be certified to be sold at the fully licensed dispensaries throughout Maryland.

Currently there are three fully licensed dispensaries that were granted their final licensure by the Maryland Medical Cannabis Commission. Thus far two of the three dispensaries reside in Frederick County; these are the Wellness Institute of Maryland, which is taking pre-orders and KRN Holdings, which was just recently approved. The third dispensary to become fully permitted as of this past Tuesday is Potomac Holistics which is located in Montgomery County. William Askinazi, the owner of the Potomac Holistics’ dispensary has stated that he is hoping to have medicine on the shelves within two to four weeks.

While there were over 100 dispensaries that were given the initial approval, many have not completed their final inspections in order to begin dispensing. The deadline for final approvals by the Cannabis Commission is set for December 8th, but they may grant extensions do to those companies that are experiencing zoning issues. With medicine almost available all companies involved within the industry are working diligently to achieve their final licensure in order to get product on the shelves for patients who desperately need this treatment.

Currently there are over 12,400 patients enrolled in Maryland’s medical marijuana program and only 550 medical providers who are registered to certify patients. If you have not received your certification, feel free to call Greenway Consults at 410-762-8745 to assist you through the process of getting enrolled and receiving your medical marijuana card.