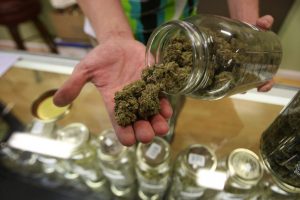 All signs point forward to Maryland’s medical marijuana dispensaries opening the first week of December. While there has been no specific date when the medical marijuana will be available the general consensus among different industry leaders is that dispensaries will begin serving patients within the next week or so. The Maryland Medical Cannabis Commission (MMCC) has not issued a public statement on when the exact dates will be other than that it “anticipates that medical cannabis will be available to patients from a licensed Dispensary in early December.”

The owners of the Frederick dispensaries are diligently preparing for the sale of medicine within the near future, which leads us to believe that it will be available within the “early December” time frame suggested by the MMCC. Mike Klein who is the owner of the Wellness Institute of Maryland, the first dispensary which was approved by the MMCC, stated that, “We are planning and staffing and spending money based off the assumption that we are going to have it by then…I am confident, but not certain.”

According to Jane Klink, owner of Kannavis, which is another approved Frederick dispensary, they have hired 10 full-time staff members and expect to increase store hours once the medicine arrives. Currently, they are open from 1pm to 7pm, but are only selling medical marijuana accessory products at this time.

The medical cannabis is in the final stages of the supply chain where it is being rigorously analyzed by the approved testing laboratories. Once this step is completed the medicine can then get shipped directly to processors and dispensaries for sale. Steep Hill Maryland which was the first approved testing laboratory in Maryland has already analyzed over 1,200 pounds of medical marijuana and tested an assortment of products ranging from oil and tinctures to creams and vaporizer products.

With the state having these strict testing protocols, the patients can ensure that they are receiving the highest standard, safest medication. These approved laboratories test the medical marijuana for heavy metals, hair, mites, insects, molds, and other harmful contaminants. In addition to testing for the potency of the products they also are required to give a thorough analysis of the chemical composition and cannabinoids that are present. Two of the most common, well-known cannabinoids that they test for our THC and CBD. Each cannabinoid within the plant offers different healing properties in the treatment of various debilitating conditions.

However, at this point, do to security reasons it is not clear from which grower the first crops of medication came from or how much product will be available by the first week of December.  Mike Klein stated that “We have close to 2,000 patients who have registered with us…We are unsure how long it will take for us to provide service to those 2,000 people.”

None-the-less this is a great sign for the patients of Maryland who can expect to receive relief shortly. After years of impediments and set-backs there is an overwhelming sense of excitement for patients and advocates alike for the commencement of this long awaited program.