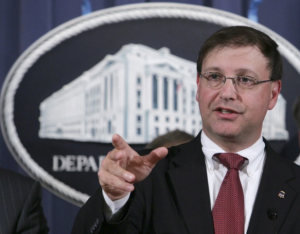 Acting DEA Administrator Chuck Rosenberg is in hot water for some incendiary comments he made last week regarding medical marijuana. When asked by CBS News what he thought about medical marijuana during a press conference, Rosenberg replied by calling it “a joke.” Now, many people from all across the country are speaking out against the hypocrisy of Rosenberg’s statements, and over 10,000 signatures have been sent through Change.org to encourage him to resign.

What did he say that’s got medical marijuana patients so riled up? Here’s an excerpt from CBS News:

“What really bothers me is the notion that marijuana is also medicinal — because it’s not,” Rosenberg said in a briefing to reporters. “We can have an intellectually honest debate about whether we should legalize something that is bad and dangerous, but don’t call it medicine — that is a joke.”

“There are pieces of marijuana — extracts or constituents or component parts — that have great promise” medicinally, he said. “But if you talk about smoking the leaf of marijuana — which is what people are talking about when they talk about medicinal marijuana — it has never been shown to be safe or effective as a medicine.”

It’s no surprise that the head of the DEA would greatly question the legitimacy of medical marijuana, but what has upset people is his blatant rebuttal of hundreds of accredited studies. And these studies don’t come from the fringe, either. In fact, Rosenberg’s assertion that medical marijuana is “a joke” goes against one of the most accredited and well-respected medical organizations out there, The Journal of the American Medical Association (JAMA). According to a June, 2015 study, the Journal of the American Medical Association has verified the claim that medical marijuana is a viable treatment option for chronic pain, and the evidence is in the numbers.

The study contends, “There was moderate-quality evidence to support the use of cannabinoids for the treatment of chronic pain and spasticity.” And when you stack up medical marijuana studies against prescriptions painkiller studies as far as pain relief, there’s another alarming trend. While no study has shown medical marijuana to cause harm, serious addiction, or death, there are many that confirm this is the case with prescription painkillers. In fact, the CDC claims that since 2013, there have been over 16,000 deaths due to prescription drug overdoses; and that is bad news for the DEA.

Why people are fighting back against bad info on medical marijuana

Much like here in Maryland, the positive momentum towards medical marijuana legalization has been tremendous. And it’s not just about studies and political agendas. The reality is, many people all over America who suffer from chronic pain have seen massive benefits from medical marijuana treatments. This is why when misinformation gets out there, many average, every day Americans are stepping up to speak out in favor of safe, healthy care, over drugs. Here’s an excerpt from the Washington Post:

“My mom is a legal patient in Rhode Island, and she uses medical marijuana to deal with the severe pain she experiences from multiple sclerosis,” said Tom Angell, chairman of the group Marijuana Majority, which started the petition. “Medical cannabis is no joke to my family or the millions of other American families who have seen its real benefits.”