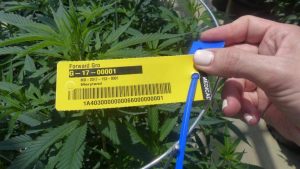 The first plant to be grown in the state of Maryland is located at ForwardGro’s facility.

ForwardGro has shared a picture of the first plant grown under Maryland’s Medical Marijuana Laws. After years of unforeseen delays Maryland Medical Marijuana patients have a major victory to celebrate. This news confirms the expected timeline of medicine being available for sale by the end of the Summer. ForwardGro won 1 of the 15 grow licenses in the state of Maryland. They were notified they had received their grow license in the end of 2016. Since then the company has moved at an unfathomable pace to create one of the largest grow facilities on the east coast.

The pictured plant is one of many that will be grown in ForwardGro’s state of the art facility.  The plant has a tag as required by Maryland law, which tracks “seed to sale.” This system tracks every stage of the plants life cycle, from the moment the plant is placed in the ground, all the way to the point it is eventually sold to a Maryland Patient. The plant has a tracking number of #000000001. It should be noted that the Compliance Director associated with this plant  has the MMCC State Badge #00001 .

ForwardGro has definitely set the bar for the states other 14 grow facilities. Several of these other facilities are on track to receive their final inspection in the next several weeks, which would then allow them to also begin growing cannabis. Green Way Consults will be sure to keep everyone updated on any additional progress from ForwardGro, or any of the states other grow facilities.

With medicine available for purchase in the next several weeks now is the time to obtain your Maryland Medical Marijuana Card. Anyone interested in doing so can call Green Way Consults at 410-762-8745, or request an appointment through Green Way Consults website. It has been a long journey for all parties involved, so this is a time to celebrate a major milestone in the Maryland Medical Cannabis’ Programs history.

Green Way Consults LLC. was formed to serve Maryland’s current and future Medical Marijuana clients. Our goal is to continually educate others of the amazing medicinal uses of cannabis through educational campaigns along with keeping all members of the community updated with the current status of the Maryland Medical Marijuana program. We also hope to assist all those who qualify for the program and wish to receive there medical marijuana card.
Copyright 2021 Greenway Consulting LLC