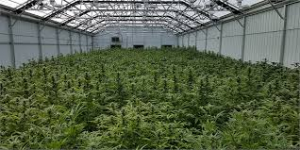 ForwardGro will be operating green houses in Anne Arundel County.

It has been a long journey since Maryland first legalized medical marijuana in 2013. A journey that has been mixed with hurdles and opposition. Even recently there has been political upheaval by black lawmakers who have felt that minorities didn’t get a fair shot at receiving licenses within the industry. The Legislative Black Caucus has demanded that extra licenses be awarded to create greater minority participation in the industry and has even filed law suits against Maryland’s Cannabis Commission. However, this has not stopped many of the Maryland companies who were victorious in the state’s competitive application process. Companies like ForwardGro, who have procured approval are diligently building out so that their product can reach patients by the end of summer.

ForwardGro, one of thirteen approved cultivators, has spent over 10 million dollars erecting a world-class green house, where medical marijuana will be grown. ForwardGro will provide medical marijuana to dispensaries. The dispensaries will then retail to patients who suffer from numerous ailments and debilitating symptoms. Within the next month ForwardGro expects to plant its first seeds and begin cultivation. ForwardGro located within Anne Arundel County hopes to receive its final inspection within the next two weeks. Companies like this are expecting final products to be in dispensaries by the end of summer. There is great optimism among many of the growers and processors that they will complete build-outs and provide product within a timely fashion.

Some experts believe the Maryland’s medical marijuana market will be worth over 130 million by 2020. ForwardGro’s massive cultivation facility looks to produce over 9,000 pounds of medical marijuana per year. While there is concern about the well-being of the community, cultivation facilities like these will be highly regulated and pose no threat to its surround inhabitants. This state of the art facility is off the beaten path and protected by armed guards and top-notch security systems.

The state will have a total of 94 dispensaries where patients can purchase their medical marijuana. Before product is ever consumed by patients it will have to go through credentialed testing labs to ensure consumer safety. State certified laboratories such as Steep Hill Labs will test for heavy metals, pesticides, and dangerous levels of solvents within the flower and manufactured products. The Cannabis Commission, along with the growers and processors, want to insure the highest quality standards of products when it comes to the patient’s well-being.

There have already been almost 5,000 patients enrolled in Maryland’s medical marijuana program since the Commission opened the patient registry about 3 weeks ago. Licensed cultivators and processors hope to meet the demands of the highly anticipated program. In order to enroll in the program, you must have a bonafide relationship with a registered medical marijuana doctor within the program.  Greenway Consults can help aid in this process. Feel free to contact one of Green Way Consultations representatives at 410-762-8745.