Kevin Durant had a rough night late Friday outside of a popular night club in California. Durant arrived at the club and was surrounded by paparazzi. While exiting his SUV Durant clearly has a clear pill bottle roll out of his car door onto the ground.  The pill bottle clearly appears to be holding Marijuana.

Durant’s bodyguard immediately tried to block the canister from the cameras view, telling the cameraman “Come on man, you don’t want to do that . Come on.”  To make things worst the video has someone in the background yelling “uh, oh, dropping the WEED!” 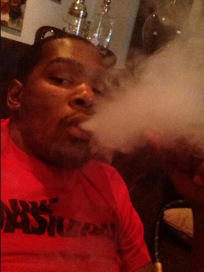 Durant has yet to make a comment about exactly what was in the clear prescription bottle. Durant is originally from Washington , D.C , where there is not only medical marijuana but recently recreational marijuana was also approved. This incident took place in California, where medical marijuana is not exactly uncommon. Durant missed the majority of this season from a lingering foot injury, and was shut down for the season after having foot surgery. Durant is presumably still in pain, especially considering he still is wearing a walking boot from his surgery. This leads to the real question, is this a big deal, and should any of us care? With nearly half of the country currently having some form of medical cannabis laws on the books, its fair to say some of the shock of one of the worlds best athletes using marijuana seems to be more acceptable. It also wouldn’t be the first time a world class athlete has been caught red handed using marijuana (remember Michael Phelps famous bong hit picture?) Would parents prefer their children have seen a bottle full of pain pills fall out of Durant’s vehicle instead?

The N.B.A addressed this issue when Colorado legalized recreational marijuana. With the Denver Nuggets (ironically) being located in Colorado, the N.B.A let all players know that using Medical Marijuana would not be acceptable, even if that player lives or plays in a state where it has been approved. Check back for updates as more information becomes available.